Don’t Be Too Proud to Scale! – CrossFit HCC

Don’t Be Too Proud to Scale! 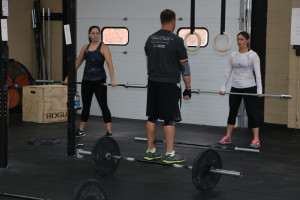 Scale the Workout to Suit Your Physical Ability

(Excerpts From the Tabata Times):

One of the most important tenets of CrossFit is that it is universally scalable for anyone, as described by Coach Greg Glassman:

The needs of an Olympic athlete and our grandparents differ by degree not kind. One is looking for functional dominance, the other for functional competence. Competence and dominance manifest through identical physiological mechanisms. We’ve used our same routines for elderly individuals with heart disease and cage fighters one month out from televised bouts. We scale load and intensity; we don’t change programs.

Technique Is the First Priority

Emphasizing technique is essential to making athletic gains. In fact, at CrossFit Level 1 certifications, the primary focus is on teaching and reviewing solid technique in the nine foundational movements.

Technique – like its cousins mechanics, form, and style— is not at odds with intensity, but is in fact essential to maximizing power and thus fitness. Proper technique is the mechanism by which potential human energy and strength are translated into real work capacity.

“Beginner athletes should aim for a number of reps that will be as challenging for them as the prescribed workout would be for an intermediate athlete.” – Clea Weiss

Technique, as it turns out, is not the enemy of intensity; rather, it is a very close friend. For the beginning athlete, or whenever an athlete is learning a new or unfamiliar movement, this is an important thing to consider in scaling. By scaling down the workout in order to focus on learning proper technique, the athlete actually increases work capacity by maximizing his/her power output.

Here are examples of scaling using CrossFit benchmark WODs (taken from “the Girls for Grandmas “ section of the CrossFit Level 1 training manual):

So how was this workout scaled for a beginner?

Here are some examples of other basic, bodyweight movements that can be modified for a given athlete’s skill level:

The common theme with these movement modifications is that they are modified so that the lower body can assist the upper-body.

So how much should you scale down the rep scheme, prescribed weight, or movement itself without making the workout too easy? Athletes must be warned about the potential to “overscale” a workout, or making the workout so easy that the athlete is no longer challenged.  Here is a simple measuring stick for scaling to consider:

If you aren’t doing a WOD Rx then you shouldn’t be able to do all the reps in a given set or round unbroken. If this is the case then you scaled yourself too much.

Scaling is as much art as it is science. In order to scale effectively, a coach (or the athlete him- or herself) has to take into account the athlete’s current work capacity as well as any issues they may have in terms of injuries. The ultimate goal is to achieve a potent training stimulus that makes the athlete better, stronger, and faster — but also does so safely. Athletes have to be challenged in such a way that they are pushing the limits of their work capacity without going over the edge; this will look different depending on the skill level of each athlete. Scaling is definitely a skill requiring much practice but results in huge benefits for the athlete when done well. Your Crossfit Coach can help you achieve the correct formula for scaling a workout

Don’t Be Too Proud To Scale

You have to know your own body and its limits. But most importantly, there’s no substitute for common sense.